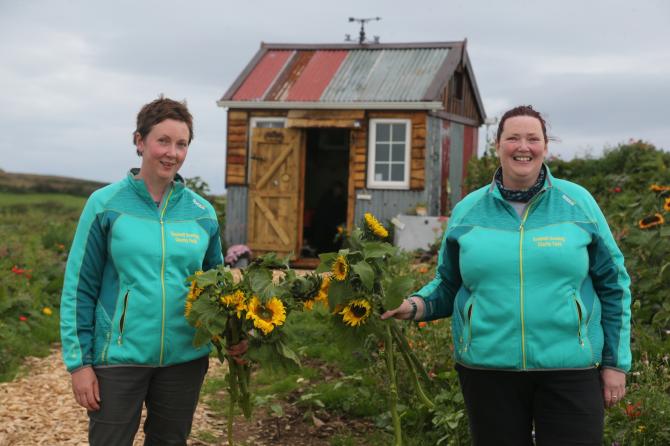 THREE charities close to the hearts of the Hunter sisters will benefit from money raised after they opened their ‘goodwill growing’ charity field behind their Causeway Road home, to the public.
Violet Hunter and her sister Rosemary came up with the idea of a sunflower field for charity after a visit to Romania six years ago, but as can often happen when we live busy lives, it wasn't until this year they got their idea off the ground.
Speaking to The Chronicle Violet said: “Rosemary and I went to Romania as part of the Smiles Foundation and as you travel through the country there are these massive fields of sunflowers - we thought they were wonderful. We wondered if we could recreate them back home but we never got around to it.
“We hope to return to Romania in December of this year so now seemed like the right time to do it and raise some money for the charity at the same time.
“We decided to plant sunflowers but then Rosemary suggested pumpkins too. So we planted two acres of sunflowers and 300 pumpkins!”
Not only the Smiles Foundation will benefit from the charity field, as Violet explained: “Our family, like lots of families, have been touched by cancer. So we decided to split the money raised between Smiles, Laurel House in Antrim and to Cancer Research UK.”
So if you're out and about on the Causeway Road, just above the Aird between Giant's Causeway and Dunseverick Harbour, why not call in and take a look at the beautiful view and do your bit for charity at the same time!