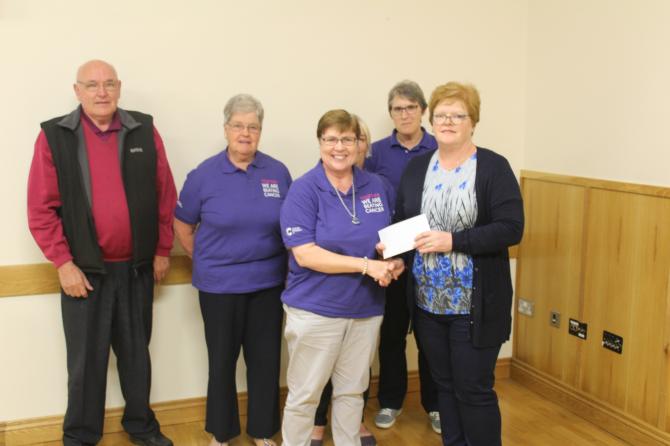 BUSHMILLS Through the Wars has been busy handing out cheques after this year’s exhibition raised £3,500 for charity - taking the total to well over £45,000 since it started 13 years ago.
The committee were joined by members of the public at Bushmills Parish Hall to celebrate the success of this year’s exhibition that was visited by people from all over the world and to present cheques to nominated charities.
Andy McGugan, acting chairman of Bushmills Through the Wars, heaped praise on those who were involved in this year’s exhibition.
“We would like to thank everyone who attended and donated in terms of money, as well as their own artefacts and war memorabilia,” Andy said.
“This was our 13th year of the exhibition and it was well attended as usual.
“We were lucky to have people from all over the world to call in when visiting the area, as well as those who come back to support us year after year.
“A special thank you to Billy our treasurer and to Maureen for organising the cafe.
“We would also like to thank The Chronicle for their excellent coverage before, during and after the event.
“We had the special privilege of sampling the scones of Eileen Richmond and the French Rooms took over the cafe for three days - so thank you for that.
“To the rest of the committee who helped with setting-up and taking away the exhibition, we appreciate your support.
“However this wouldn’t have been possible without the hard work and dedication of Glenda Rodgers who helps to run this exhibition every year.
“We are already looking forward to next year’s exhibition when another local charity will benefit.”
The exhibition raised £1,000 for the Bishops Appeal which helps those who are in urgent need.
The Bushmills Branch of Cancer Research UK were also given a cheque for £1,000.
£400 was given to Stella Bolton to help with a project of building a school in South Africa, with £1,000 also presented to  the Royal British Legion Bushmills Poppy Appeal.
A £100 cheque was also presented to Billy McIntyre of the Royal Navy Association.