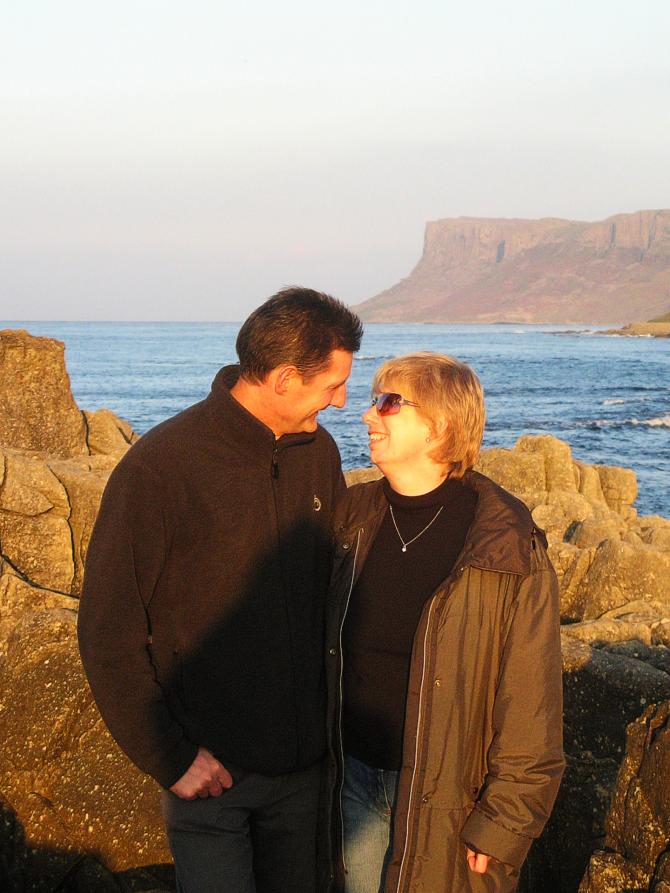 Dermot Breen, who last year completed a gruelling 700 mile trek along the ‘Ireland Way’ in memory of his late wife, Jacqui, has now told his fascinating story in his latest book, ‘Exiles: A journey through Ireland from Beara to Ballycastle’.
In August 2018, after walking the gruelling 700 mile journey, he finally arrived at his late wife’s graveside in Ballycastle, honouring a solemn promise to complete the walk in her memory and also to raise funds for Cancer Research UK.
The challenging Ireland Way stretches from Castletownbere on the Beara Peninsula in Co Cork to Ballycastle on the North Antrim coast and his journey took him over nine weeks to complete - six weeks walking and over three weeks recovering from injury.
In 2015, Dermot walked the entire Ulster Way around Northern Ireland and in 2016 he walked the Camino de Santiago in Northern Spain.
In 2017, he took a break from long distance walking to concentrate on writing and has previously had two books published charting his physical and emotional journeys since he lost his beloved wife of 28 years to ovarian cancer in January 2015.
In his latest book, the third and final chapter in his Pilgrim Trilogy, Dermot tells the story of his epic journey through the hidden heartlands of Ireland, following a route taken by a seventeenth century Irish Chieftain for much of the way.
This was Donal Cam O’Sullivan Beare who led 1,000 of his followers out of Munster in 1603 to escape forces loyal to Elizabeth 1 in the wake of the disastrous Battle of Kinsale.
Commenting on the route, Dermot said, “O’Sullivan Beare and his followers had to endure harsh winter conditions, getting lost in snow covered mountains, almost constant attack by Royalist forces and severe injury and death.
“I in turn had to endure a blistering heat wave, getting lost in fog covered hills and being attacked by herds of bullocks and suffering a demoralising injury that almost brought my walk to a premature end.
“I was only two weeks into my journey, when I suffered a torn calf muscle while attempting to escape from a herd of cattle. I then had to take a few weeks out to receive physio and allow my leg to recover before starting back.”
“O’Sullivan Beare’s people also experienced extreme hunger on their march, but fortunately I only experienced extreme hospitality!"

For more, see this week's Chronicle