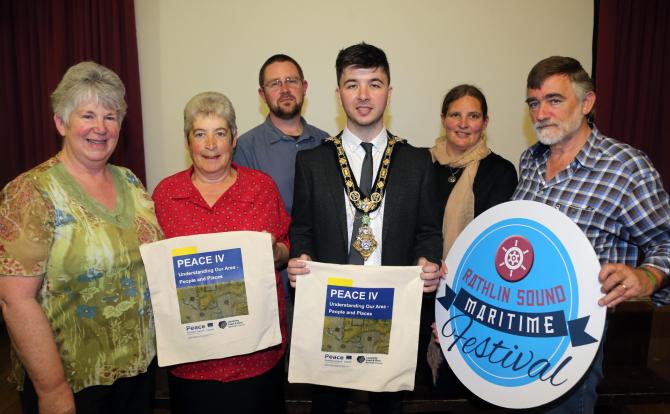 A skills-building programme on Rathlin Island has uncovered a lasting link to Ireland’s first Viking invasion which took place there over 1000 years ago.

Exploration of genetic ancestry through DNA testing was part of the ‘Our history - for keeps’ initiative delivered by Causeway Coast and Glens Borough Council Museum Services and funded by the European Union’s PEACE IV Programme.

13 island residents provided DNA samples which showed that almost everyone on the island had strong ancestral connections to Ireland and Scotland. Rathlin was attacked by Vikings in AD 795, and the raiders later settled on the island. Although most participants hoped to see evidence of Vikings in the family, only a single test came back with evidence of Scandinavian ancestry. While further testing would no doubt reveal more islanders with similar links, for now Noel McCurdy has the dubious honour of being the last Viking on Rathlin!

The full skills-building programme was developed by Rathlin Development and Community Association (RDCA) as a broad ranging selection of training opportunities. Open to all Rathlin residents, it aimed to leave a legacy of heritage skills and focused on the creation and preservation of island-based archives, ensuring that knowledge would be available for future generations.

Over the course of the winter, RDCA and Museum Services managed to run almost 50 hours of training workshops. Along with the DNA testing, it also covered the creation and curation of oral histories, an OCN accredited tour guiding programme and genealogical research.

The Mayor of the Causeway Coast and Glens Borough Councillor Sean Bateson, who recently attended the project’s finale event on Rathlin Island said: “It is clear that there is an appetite among the community to continue exploring the island’s past and the heritage of its residents. Council looks forward to continuing our partnership with the RDCA and supporting such heritage projects well into the future.”

The training programme on Rathlin Island was one element within Causeway Coast and Glens Borough Council’s PEACE IV Understanding Our Area programme, being delivered by Museum Services with a wide range of community partners. PEACE IV Understanding Our Area set out to increase the understanding and expression of the borough’s culture and history, our people and places, through museum collections, historic sites and cultural heritage to create a peace building legacy. The initiative is part of Council’s PEACE IV Local Area Action Plan, funded by the European Union’s PEACE IV Programme, managed by the Special EU Programmes Body (SEUPB), which is providing £3.8 million for community projects across the borough.